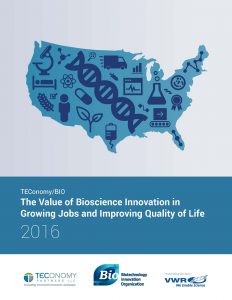 The report, The Value of Bioscience Innovation in Growing Jobs and Improving Quality of Life 2016, finds U.S. bioscience firms employ 1.66 million people, a figure that includes nearly 147,000 high-paying jobs created since 2001. The average annual wage for a U.S. bioscience worker reached $94,543 in 2014. These earnings are $43,000 greater, on average, than the overall U.S. private sector wage of $51,148. The report further shows that since 2012, the bioscience industry has grown by 2.2 percent with four of its five major subsectors contributing to this overall job gain. Two of these subsectors—research, testing, and medical labs and drugs and pharmaceuticals—have led growth during the 2-year period with both increasing employment by more than 3 percent.

Indiana’s bioscience industry is large, highly specialized, and stands out in its diversity. The state’s bioscience companies employed more than 58,000 in 2014 across 1,727 state business establishments. Indiana essentially has a specialized employment concentration in four of the five major subsectors, though the location quotient for bioscience-related distribution comes in just short of the 1.20 specialization threshold. The state is highly specialized in three subsectors—agricultural feedstock and chemicals; drugs and pharmaceuticals; and medical devices. Overall, the industry has grown by 1.4 percent since 2012 with especially large job gains in drugs and pharmaceuticals. Indiana’s research universities combine to conduct nearly $582 million in bioscience-related R&D. Indiana has been increasing its bioscience patents, which reflect the diversity of the industry with medical devices, agricultural biosciences, biochemistry, and drugs and pharmaceuticals all represented as areas of focus.